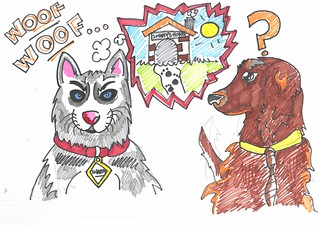 ​Derinagree National School, Mallow, Co.Cork. 4th, 5th & 6th Class, 25th September 2015
One day Smartie the dog was in her crib, playing it all cool. She was thinking about playing some b-ball (basketball).

Just then, her family called her to go on a trip in the car to Westmeath.

The family dropped her off and left her there, in the middle of nowhere. Smartie was feeling left out and scared.

Smartie was wandering around for a bit, and she came across a farm. Suddenly a bulldog came charging toward her and said, “Get out of this farm, you’re not wanted! You don’t belong here!” 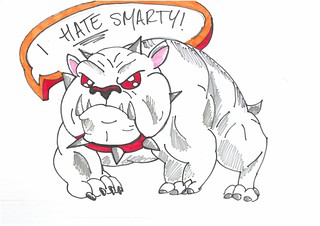 Sam was an old red setter and he was very friendly. He said, “Back off, Tom.”

Then he turned to Smartie and said, “Stay here. Don’t listen to that bulldog. He’s just jealous.”

“Jealous of what?” said Smartie.

“That you’re a nicer dog. Much cuter. He’s afraid the farmer will give you more attention,” said Sam.

Smartie started thinking about living on this farm in Westmeath.

Sam said to her, “The farmer’s best dog sadly died so he needs a new sheep dog to enter the sheep dog trials. Would you like to try out for it? ‘Cause you look like a sturdy, strong pup...”