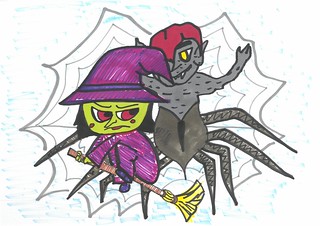 It all started when Sophia the Witch lived in a haunted castle.

Her parents died on Tuesday, October 19th, when she was five.  Her best friend Terrence the Spider Boy tried to get her superpowers, but hecouldn’t.

One day the doorbell rang, Terrence went to go answer it.  It was Sophia’s mean cousin, Derrick!

Sophia trapped Derrick in a room and tried to get his superpowers by casting a spell.

“I never want to see you again,” said Sophia. 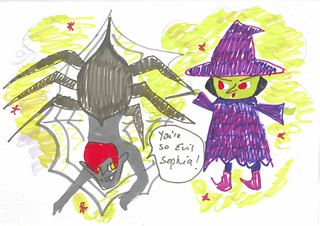 “I’m really sorry, but all the times I came to your house you were mean to me.  Once you even dropped me down the stairs!”

She continued, “If you give me your superpowers I’ll forgive you.”

“No, I won’t give you my superpowers,” replied Derrick.

Sophia snuck into Derrick’s room while he slept and took his powers. But Sophia didn’t know that Derrick had invisible eyes in the back of his head!

Terrence came into the room and said, “What are you doing?”

Sophia replied, “What are you doing here? You shouldn’t be home so early...,”