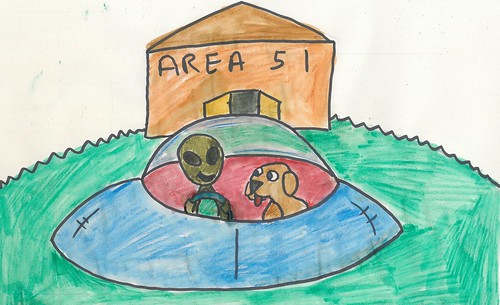 One day Svonsatron the alien crash landed on Earth. He landed in Area51 where people caught and trapped him. He was afraid they were going to kill him.

He said: “Gaba-laba-loo-loo?” This meant “where am I?” in Guferas language.

All the scientists were really shocked and wanted to investigate this alien. They put him in to a crate where Junior the dog was asleep.

“We need to clone him” Junior heard the scientists say outside the crate.

Junior was actually an alien dog and was able to translate for Svonsatrone.

The scientists brought him to an operating theatre and put a chip inside his neck.

Svonsatron felt really sad, scared and sick so decided to try and escape…