The Switch of Man Man and Girl Girl 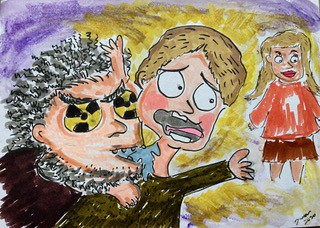 Once upon a time, there was a man called Man Man who was bitten by a radioactive man and turned into a man.

Earlier that morning, his girlfriend broke up with him so he went for a walk. The girlfriend left him for the dentist, Dr. Salt, which was his greatest fear. His girlfriend was Girl Girl. She was bitten by a radioactive girl.

Man Man used to be a girl and Girl Girl used to be a man. When they were bitten by the radioactive people, they swapped.

He looked up to his girlfriend because she was a bin woman. He thought it was a cool job. She lived in the bin and she was working from home.

Man Man’s greatest wish was to be a banana man because he was obsessed with bananas. 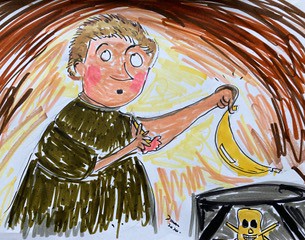 One day, he started experimenting by putting a banana in a tube of nuclear waste and smushed the banana into his arm. It didn’t work and he just got sick.

The Evil Dr. Pepper forced him to go to the dentist because his teeth were dangling from his gums.

The reason why he feared the dentist was because he kept imagining the dentist chair would swallow him up at any moment.

When he called to book an appointment, he couldn’t get one because the dentist booked a reservation with Girl Girl.

Man Man got really angry and raced to the restaurant doing back flips.

When he got to the restaurant he saw his girlfriend through the window, opening a Happy Meal with excitement...