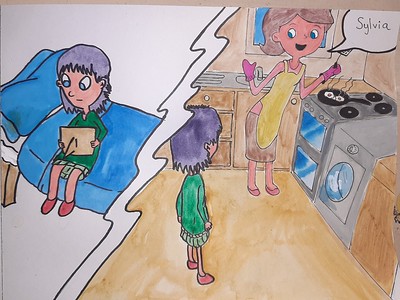 Waking up is difficult to do, especially when there’s a troubling task ahead. It’s a constant obstacle. So it was with trepidation that I awoke that morning. I got up, changed and entered the living room.

Mother was frying eggs as Sandy sat beside her. Mother turned and dropped an egg.

“Sylvia…” she muttered, tossing me sausages. Worry crossed her face.

I swallowed some egg. “Where’s Liam?” I asked.

“He’s buying a cake,” Mother replied. “He found one with your name on it.”

The pan sizzled, and Mother started. “Oh, dear,” she murmured. “How did this happen, Sylvia?”
I shrugged helplessly. “What time is it?” I asked.

I stood up and refused breakfast. “I need to pack,” I explained before entering my room. 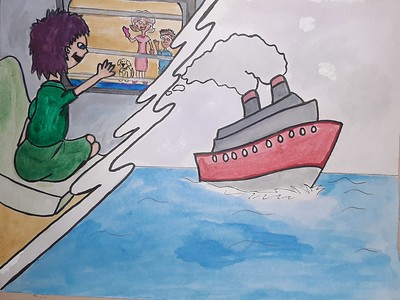 I only had to glance at my suitcases to know that they were sufficiently packed. I searched the room for belongings I needed; photographs and gifts. I wanted to remember my family. I spent some minutes searching the room before I was content with everything and entered the living room. Liam had returned. “Five more minutes,” Mother announced as I entered.

My time left in the house flew. The weight of my decision crashed down on me. But I knew that this was my choice.

“It’s time to go,” Mother declared after several long seconds. She seized Sandy and left the house, Liam and I following. I collected my suitcases, and we began to walk down to the quay. The boat was ready; emigrants were streaming onto it.

I mounted the boat, following some other emigrants. I looked out of a window. In the crowd, I found my family. Within minutes, the boat had left the quay. Soon I had lost all sight of Ireland.

My journey had begun.