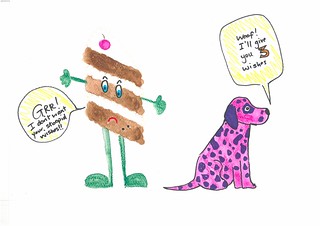 Mr Fudgecake decided to take the dog home. He said to the dog, “I’ll call you Lily.”

Lily the dog was a dalmation with pink fur and purple spots. She said, “I’ll give you three wishes.”

Lily started to cry and hopped on a chair. “Why did you take me home? I don’t think you like me.” 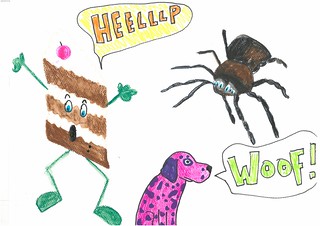 Lily ran away to make a plan to help Mr. Fudgecake become calm and kind. “I helped people before,” she thought to herself. “I can help him too.”

When Mr. Fudgecake sat down to have a cup of tea, he saw Incie Wincie Spider on top of his chair he screamed “HEEEELLLPPP!!”

Lily came running back and said, “What happened?”

“I can help you not to be afraid of spiders anymore. Take one of my wishes,” said Lily.

“Okay, I’ll take one of your stupid wishes, only if it will help me,” replied Mr. Fudgecake.
Lily barked three times and then the wish came true. Then Mr. Fudgecake kept the spider as a pet.

Mr. Fudgecake thought, “Maybe if I become nice, I can meet my favourite popstar, Mack the Banana”.