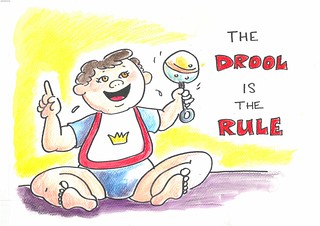 All Saints National School, Blackrock, 4th, 5th and 6th Class, 13th May 2015
Once upon a time in New York, Tim, the baby who rules the world, was drinking a bottle of milk.

Tim was at a Dictator Conference with other dictators, explaining to them that they were horrible because they were all too nice.

Tim heard someone whispering in the crowd, “Did you know Tilly the talking teddy has a crush on Tim the baby dictator?”

Tim was frightened to find out Tilly had a crush on him, but he wasn’t going to let that stop him from being the best dictator ever.

Then his mother came in and told him to go to bed.

“But Mam! It’s only 9 o’clock! I’m a dictator!” he said angrily. “All the other dictators get to stay up later.” 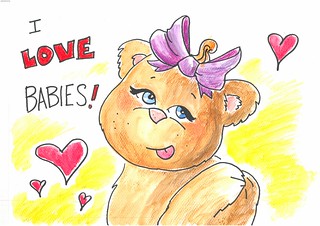 The next morning, Tim was eating his baby food breakfast in his high chair. He was wearing his bib and he his bowl that said ‘I’m The Best Dictator.’

He was getting ready for a debate. Just then, Tilly burst in saying, “Do you want to go on a playdate with me?”

Tim didn’t know what to say so he ran out of the house.  Tilly started to cry.

“Why doesn’t he love me?” Tilly sobbed.

Tim rushed to his dicator debate.  He had packed extra freeze rays in case things got out of hand, his diamond dodie in case he got angry and extra nappies.

As soon as he got to the conference, everyone started to aim water pistols at him...