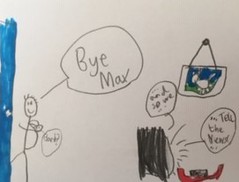 Once upon a time there was a puppy called Max.

He was five months old and was white with ginger spots. Max was a happy and friendly puppy but sometimes he was a bit silly.

His owner was a scientist.

One day the scientist was late for work.

He looked around for Max but couldn’t see him. He picked up his bag and opened the front door.

“Maybe he is asleep in his room,” the scientist said to himself as he left the house.

But…Max wasn’t actually in his room. He was in the scientist’s bag! 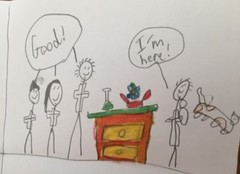 When the scientist arrived at the lab, Max jumped out of the bag before any of the other scientists could see him.

He slipped on the wet floor and bounced into a big machine in a massive room.

There were buttons and levers everywhere on the machine. “I wonder what this machine is for?” he barked.

Then SUDDENLY the doors slammed shut! Max started to feel strange and a bit worried.

“Oh no!” barked Max. Then he heard some buttons being pressed and the machine started to make strange sounds. 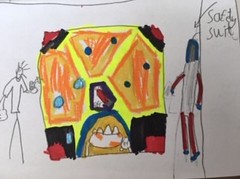 The machine started shaking and then there was a bright light.

Max didn’t know what was happening.