Timmy - The Hero of Cheeseland 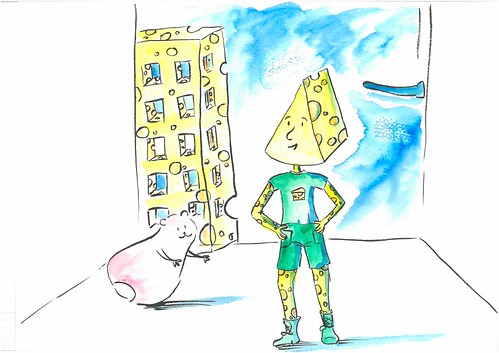 Once upon a time, there was Timmy the Cheese. He lived in the cheese drawer in a refrigerator, but at night everyone in Cheeseland would escape and run around the house.

One night, the Cheese Grater captured all of the cheese in the drawer apart from Timmy. He was still in the refrigerator, trying to catch up from some sleep from a party the night before.

At 12pm, he heard the ice cream fall and he woke up with a start.

Timmy yawned and went back to bed, but noticed it was very quiet.

He decided to go downstairs to find his brother Jeff, who was not there eating cornflakes as usual. 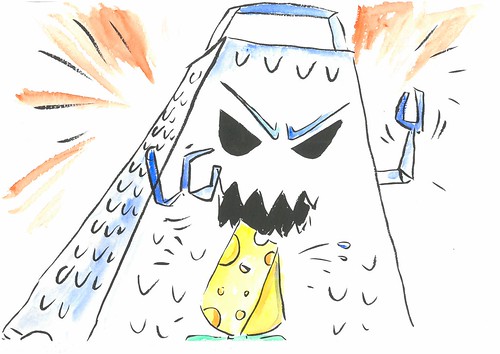 “Where has everyone gone?” Timmy asked worriedly.

He looked around and realised that the door had been left open.

He then caught a glimpse of a long trail of cheese crumbs on the floor.

There was the Cheese Grater, standing happily across the kitchen on the other side of the counter.

“I grated them all!” said the Cheese Grater happily.

“I don’t really care, I’m stronger! I could just grate you!” shouted the Cheese Grater. 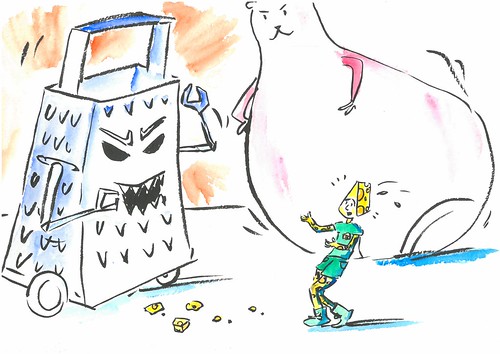 “Well, it won’t be that easy to grate ham! He’s much stronger and three times the size of you!” said Timmy.

Hammy the Ham Hamster was near the fruit bowl.

Timmy mouthed, “I need help, the Cheese Grater is here.”

Hammy the Ham Hamster ran over to help Timmy.

“Where did you take Timmy’s family?” said Hammy, as he jumped up and down, trying to distract the Cheese Grater.

“I took your family for the Grater Good,” replied the Cheese Grater.

“I will become the hero!” Timmy said proudly...