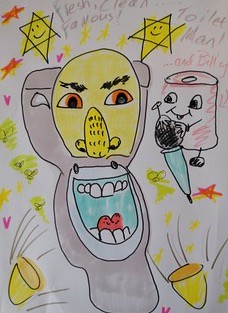 Once upon a time there was a toilet named Toilet Man. Toilet Man really wanted to be famous. But he never got the chance to be famous because he’s a toilet.

His best friend, Billy the Toilet Paper cheered him up. Toilet Man didn’t want anyone to flush him.

Billy the Toilet Paper stuck up for him by trying to fall off his rack and distract people from flushing. 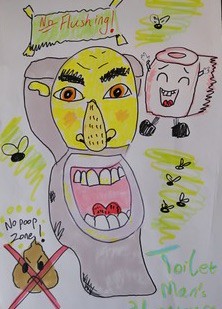 A football player, a singer or an actor?”

“I want to be a comedian,” said Toilet Man.

Jack released Toilet Man from the ground so he wouldn’t get used again and so he could train to be a comedian.

And he took Billy the Toilet Paper too.

Toilet Man escaped from his house.

He went to the woods and he found a house full of comedians. 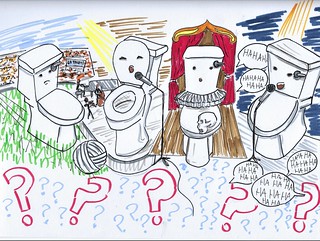 A man named John came out of the house and asked Toilet Man, “Do you want to join us?”

When Jack and Toilet Man went into the house, everyone started laughing because they weren’t a proper person.

“Why are you guys laughing?” asked Toilet Man.

“Because you’re a toilet,” said everyone.