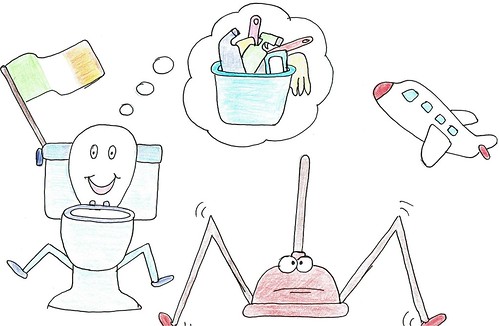 Tom the toilet wakes up in the bathroom in his house. He lives in the Pesident’s house. It’s a  clean and shiny bathroom.

However, when Tom wakes up, he sees that his best friend Pam the plunger isn’t there! He gets up and starts walking around looking for her.

He shouts out Pam’s name in distress.  “Pam, where are you!?”

Tom checks all four bathrooms in the President’s house. The security guards spot Tom walking around the house. They didn’t know Tom can move and talk!

Tom is now afraid - he’s scared of the guards. Tom starts running away and the security guards are going after him!

As Tom is running away, he spots Pam. Pam was looking for Tom as well.

Pam says, “Oh! I found you, I was looking for you!” Pam starts running away from the security guards with Tom.

Tom has a magic power, he can shoot water. He turns around to shoot at the guards. The guards slip on the water. The corridor of the house is now flooded. Pam is still scared.

Even after shooting the water, the guards are still chasing them around the house. Pam also has a super power, she can jump really high!

Pam’s jump is so strong she can jump with Tom on her back.

Pam jumps, and Tom and Pam are now flying through the air towards the airport.

Pam tells him, “Close your eyes and hang on!”

They land suddenly into a container in the airport. Planes are flying overhead. Maybe the containers are going to be shipped somewhere!

Tom is afraid that the President will know that he is the toilet that broke away.. They could check his serial number!

There are people atop the President’s house now, trying to look for this mysterious pair. It is going to be hard to get back in!

The container, however, is not going in the direction of the President’s house! Instead, the container is going very quickly towards Donald Trump’s house...