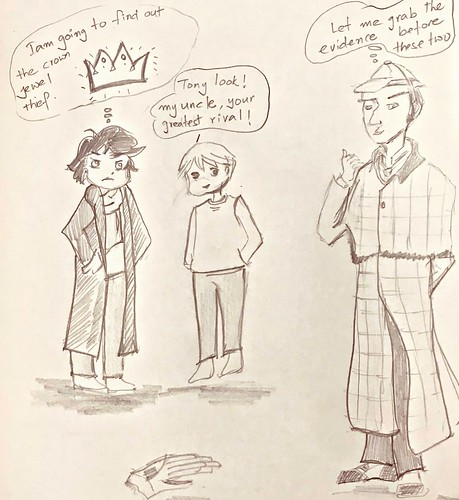 Once upon a time there was a detective that wished to find the stolen crown jewels, and he had a sidekick that was scared of everything. His name is Terry Johnson.

He was also scared that if another person found them he wouldn’t have succeeded in his career.

His dad was the one that stole the jewels, that’s why he went missing when he was a baby.

He found himself in the crowded streets of London. He decided to go where the crown jewels were.

His friend was with him and they were checking around to see if there was any evidence of who stole it.

Suddenly, out of nowhere, they saw the other detective doing the same thing!

Tony Garner’s greatest rival Craig Johnson! Craig Johnson was Terry’s uncle and Craig hated Terry with a passion! Craig despised Terry so much he kicked him out of the house and he went to live with Tony.

When they were looking for evidence they both seen the evidence at the same time. It was a glove with fingerprints! They both ran for it!...