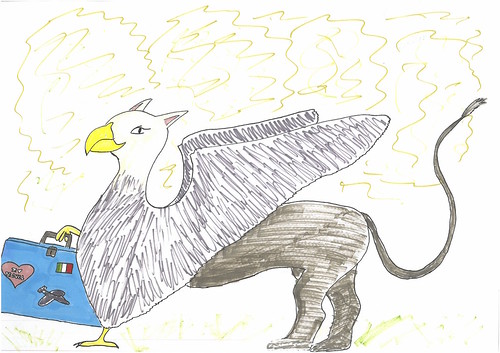 Above him in a tree was a smaller, cuter griffin!

“Do you know anyone who could be my friend?” asked the smaller griffin.

“Actually, I was looking for a friend as well! My name is Darkness.”

“My name is Cloudy!”

After a few days, Darkness and Cloudy became best friends forever. Cloudy told Darkness all about the world.

“In the world, there are loads of fantastic things like buildings and waterfalls and mountains and pyramids!” said Cloudy.

“I’d love to travel the world, but the only thing in my way are the humans!” Darkness said.

“I know a desolated spot where there are no humans!” Cloudy said. “Would you like to go now?”

“Can we go tomorrow instead? I’m a little scared.” Darkness said.

“Why don’t we travel tonight? There will be less humans!” Cloudy said.

So they left that night and on their travels, they came across what looked like a hunters’ camp.

Suddenly, hunters leaped out of nowhere and captured Cloudy!...