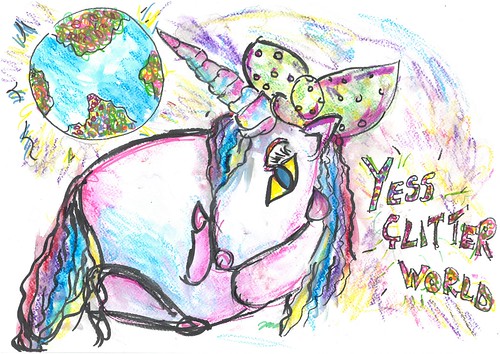 Once there lived a unicorn called Sparkle. When Sparkle was born, she had been abandoned in the woods.

There she met a Malteaser named Mary - Sparkle saved Mary from hungry foxes. Sparkle and Mary lived together in a big glittery palace in the forest.

One day when the two friends were out, they ran into a Pie Monster. He was really big. He didn’t look like a nice pie - he looked like a stale apple pie!

The Pie Monster frightened the glitter out of Sparkle!

“Aghhhhh!” Sparkle screeched. Mary was so frightened that the chocolate started to melt off her.

Sparkle and Mary ran away, but the Pie Monster followed them. Sparkle sprayed glitter in his face and they lost him! 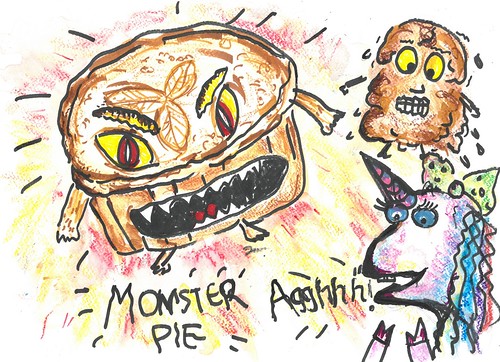 They ran so far that they didn’t know where they were anymore. Sparkle and Mary couldn’t find their home.

Suddenly they fell into a portal and were sucked into a video game. They landed into a scene of water where they met a leprechaun.

He was dressed in green dungarees and a multi-coloured jumper. His name was Larry.

He told them, “You are in a portal. You only have three lives. To get out of this portal you must complete all the levels.

If you don’t pass each one you’ll be locked in this game forever. This game is called the Leprachaun Of Greenland”…