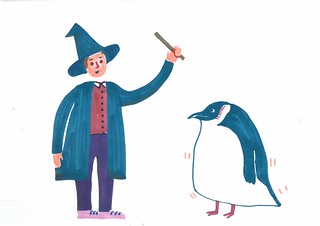 But far across the world lies his evil nemesis, Evil Rock. The evil rock was planning to take over Joe’s cave.

Joe was on the phone with Evil Rock, and the evil rock asked: “What’s your name?”

“My name is Jeff,” Joe replied. Suddenly there was a big bang, and lots of rock minions came into the cave.

They crushed Joe’s TV, and then Waddle the Waddling Penguin came waddling in. 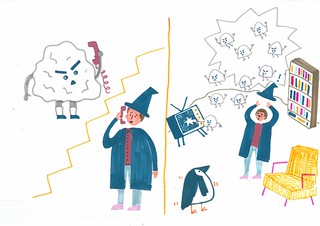 “We need to tell everyone there’s a rock attack,” said Waddle.

“But they won’t believe me, “ replied Joe.

So they ran out of the cave and went down to the village. Suddenly they saw his arch-nemesis, Evil Rock.

Waddle the penguin wanted something to eat. “Can we get fish and chips?” he asked.

Joe stopped time, and went to the chipper, got food for Waddle, and left money on the counter.

When Joe got back Evil Rock cast a big spell on Joe, but then Joe got his wand and defended himself and Waddle...