When bae attempts to help 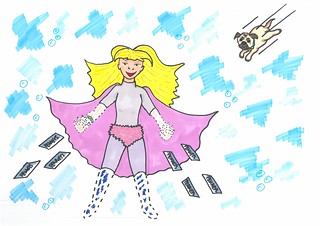 On the 26th of February, twice underneath the water, Sasha the fire-thrower trapped Abby-May in a jar of Mayo. Abby-May is an invisible superhero who shoots Penneys vouchers.

Sasha had thrown Abby-May off the Titanic. Abby-May alerted her best friend Lilly, the black flying pug, to come by using her watch to call her.

Lilly was in Starbucks with Dirk the bodybuilder with tiny arms, at the time. 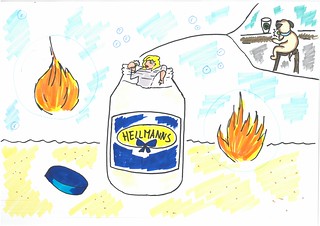 Lilly was saying, “We’re going to invite all Abby-May’s friends to Starbucks as a surprise for her birthday. Woof!”

Dirk struggled to say anything, as he could not think of an appropriate haiku (he could only speak in haikus).

Lilly’s collar started to vibrate, and she could suddenly make out her ringtone, Queen’s ‘Bohemian Rhapsody.’

After dancing the moonwalk and Dirk doing the splits for a minute, they realised that Abby-May was in danger.

“WOOF WOOF WOOF,” Lilly said as she flew to the rescue and Dirk attempted to open the door...