The Wizard who Wanted to Jump into a Pool of Gold 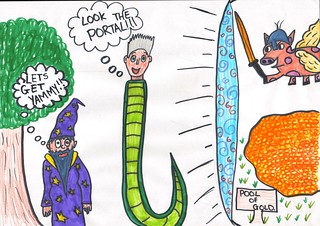 Once upon a time there was a wizard named Wazerton.

The wizard felt bad and turned Slimy into a broom.

“Do you want to be my best friend?’’ said Slimy. 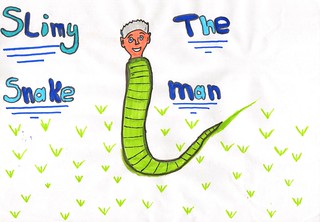 Wizard Wazerton said, "Okay,’’ and turned him back into a snake-man and then told him, “I’m afraid of Yammy the pig.’’

Slimy said, “I don’t know who that is, but I will protect you.’’

Yammy the pink and purple pig had wings, wore half a helmet, and carried a golden sword.

Yammy swam in the pool of gold that Wizard Wazerton wanted to jump into. 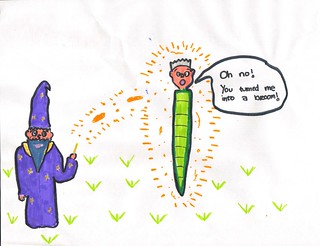 Wizard Wazerton and Slimy the snakeman moved on to find the pool.

On their way, they fell into a trap set by Yammy! There were spiders, pigs, crocodiles, and a zombie army.

The army turned on Yammy the purple pig and helped Wizard Wazerton and Slimy the snake-man out of the pit!

“Go and fight the pig!’’ said the army as they helped Wizard Wazerton and Slimy into a portal to another dimension to find Yammy the pig…