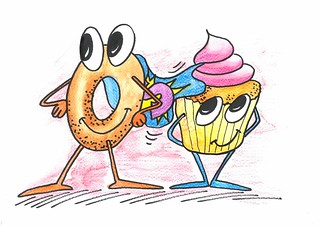 Daniel the Super-Spy Talking Donut was in a coffee shop. His day was going very well until he came across a policeman.
“I’d love a donut!”said the policeman. Daniel screamed “No! Not me!”.

The policeman pointed at Daniel and said “I will have that donut”.

Just then, Daniel’s best friend, James the Cupcake, arrived in. James grabbed a spoon and threatened the policeman. Daniel didn’t want James to get hurt so he pushed James away, but at that moment the policeman grabbed Daniel and put him in the bag. 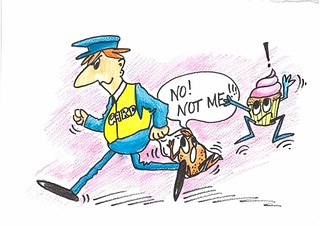 James the Cupcake vowed that he would save his best friend.

Meanwhile, around the corner, in a fruit aisle, Bob the Orange heard Daniel screaming “James, help me! This policeman is going to eat me!”
Bob the Orange vowed that he would stop James the Cupcake from saving Daniel.

Many years ago Daniel the Donut had knocked down the orange tree that was Bob’s home. He felled the tree to make room for a donut factory. And now Bob wanted to hire the policeman to be his henchman. He wanted revenge...